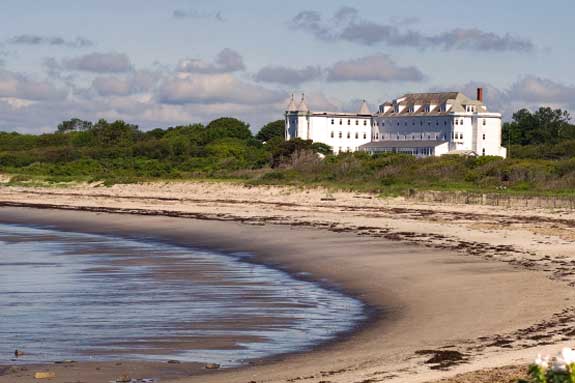 Hotels and motels have been welcoming visitors to Maine for centuries. One of the oldest hotels was the Mousam House, dating back to 1750. Destroyed in 1937, in its heyday the property welcomed dignitaries including President James Monroe and the General Marquis de Lafayette. Its bawdy reputation was part of the attraction.

Some hotels and motels in Maine are in historic structures with guest lists and stories to rival the Mousam. Others are part of nationwide chains. Either way, no matter what part of this picturesque state you plan to visit, you’ll find a comfortable, and perhaps interesting, place to lay your head.

Most hotels are found in larger cities and towns. These properties offer not only a place to spend the night, but onsite restaurants, pubs and even shops. The more deluxe hotels usually offer swimming pools, spas, fitness centers and concierge services. Top of the line hotels/resorts often offer full-service health spas, sophisticated restaurants with elite chefs and a nightly turn-down service that leaves a chocolate treat on your pillow.

Before the invention of the motorcar, motels didn’t exist. But as the horseless carriage grew in popularity roadways started popping up and along with them low-rise, simply furnished properties called motor hotels. The creation of the interstate highway system increased not only the number of motels, but the quality.

Motels are still found along highways, but some are also in urban areas. They still offer plenty of parking and are easy to reach by car. Some are still pretty basic, offering a clean place to sleep near a restaurant or other services. Other motels, particularly with the name-brand chains, also include swimming pools, onsite dining and other amenities, somewhat blurring the line between hotel and motel.

Costs vary throughout the state, based on location as well as quality. Summer is high season along the coast, so rates tend to go up. Skiers flock to the mountains in the winter and there is a similar rise in prices. As an example, a moderate hotel on the outskirts of Portland might cost $90 per night during the summer, but during the winter the same room might run $50 per night. A deluxe hotel in downtown Portland or along the coast might run $250 in the summer and $145 in the winter.

Head northwest to Bethel in one of Maine’s prime ski areas and the reverse is true. A moderately priced room might run $275 during the ski season but be under $100 during the height of summer. If staying at a hotel or motel that is part of a national chain, you might be able to take advantage of frequent traveler discounts. Many properties also offer speciials, such as night free and/or car/hotel packages.

Portland’s Old Town is home to a number of historic hotels. The Portland Regency sits in a brick, circa 1895 Federal style building that once housed the Maine National Guard. It has a place on the Historic Hotels of America Registry. The Eastland Park Hotel, also in the historic district, opened on June 15, 1927, the day after Charles Lindbergh crossed the Atlantic on his epic solo flight. Barely a month later, the famed aviator was a guest at the hotel, which hosted a banquet for Lindbergh in the Eastland Ballroom.

Just outside of Boothbay Harbor in the town of Southport is the Newagen Seaside Inn. It sits on land that was first settled in the 1600s. The current structure was built in 1943, replacing the 1816 building that was destroyed by fire. Among the noted guests were Frank Sinatra and the cast of the movie “Carousel.”

The Rangeley Inn opened in 1877 and is the last operating country inn located in the Rangeley Lakes Region. Offering a comfortable but rustic charm, the property still has wood burning stoves in the rooms, along with modern day jetted tubs.

Maine even has a few haunted hotels. The Tides Inn By The Sea in Kennebunkport was built in 1899. The original Emma Foss had a hand in designing the property and to this day shows displeasure if improvements to the inn are not to her liking. Searsport is home to The Carriage House Inn, built by Captain John McGilvery in 1874. Over the years it has welcomed notables like Waldo Pierce, who painted an impressionistic portrait of Ernest Hemmingway. The property also served as housing for army officers during World War II. No one really knows who is doing the knocking, or playing music or appearing in the hotel windows. But guests often gather the next morning to exchange tales about the noises in the night.

Maine does have a high percentage of hotels and motels that are independently owned and/or operated, but some big name brands do have properties in the state. Sheraton, Hilton, Hampton Inn and Holiday Inn have hotels in major cities such as Portland, Bangor, Augusta and Freeport. Motel 6, Super 8 and Comfort Inn are some of the motel brands found in the state, most along Interstates 95 and 295. If you are heading to the interior of Maine, you will more likely come across properties with names like the Mount Blue Hotel or the Whispering Pines Motel (now the Wilson Lake Inn). The creative names of some of these hotels and motels are part of Maine’s unique charm.