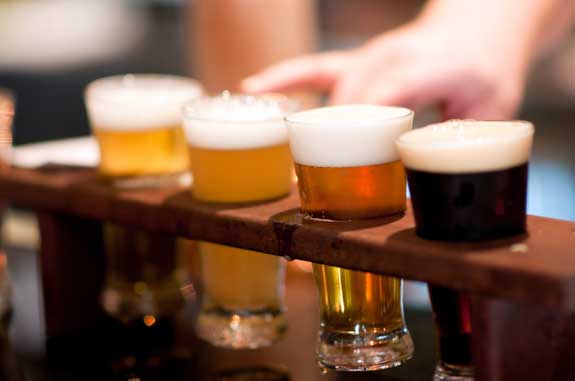 A Revolution in Taste, Quality and Aesthetic

While many brewers started out with nothing but a home brew kit filled with barley, hops and a couple of rudimentary instruments, today they are brew masters blazing the latest trends in artisan and craft beers across the country. Since the 1990s, the rise of regional microbreweries and brew pubs has exploded like the full-bodied flavor of a Belgian Tripel, and the largest concentration of these artisan breweries are in the Pacific Northwest and New England.

The six states that make up New England are like a group family members battling over Puritan heirlooms and showing off Revolutionary War scars. In other words, these states are fiercely affiliated and aligned, but neurotically competitive. This is no different when it comes to microbreweries, craft beers and the awards that are given out each year to the best lagers, stouts and seasonal beers. In true patriot fashion, Massachusetts always declares itself the victor. This is due to the success of the Samuel Adams Brewing Company, which is in Boston. Maine, Vermont and New Hampshire never take Massachusetts seriously, as they all conspire to agree that Sam Adams can no longer be considered a microbrewery due to its widespread distribution. Rhode Island and Connecticut have a tendency to sit out these regional skirmishes, preferring to pick their battles with the cultural trends in New York. Here is a sampler of what you will find on draft and in specialty bottles in Maine.

Maine has thirty-one microbreweries. That is a gold medal statistic, especially when you consider that Maine also owns the title of being the least populated state east of Mississippi. Most of Maine’s domestic and internationally known microbreweries are located in the Portland area. This vibrant city cements its status in the pantheon of great beer destinations every Labor Day, when it hosts an Annual Brewer’s Festival in the Old Port district. In 2011, twenty-five breweries participated in the event, bringing with them an astounding seventy-five different lagers and ales. However, with thirty-one different microbreweries, Maine has plenty of quality beer all year round, so as you save the Brewer’s Festival on your calendar, be sure to try a taster at the following destinations.

Allagash Brewing Company is Maine’s most globally recognized microbrewery. It specializes in Belgian-styled beers, but often adds experimental touches to the long-held Belgian traditions. A hint of coriander or chocolate, a touch of banana or honey notes, fragrant herbs, raisins, Curacao orange peels, the six different beers that Allagash brews year-round offer an array of complex, subtle and distinguished tastes. Tours of the brewery are held daily.

Operating since 1998, the Sebago Brewing Company is a popular brew pub in downtown Portland. Due to its success, it has recently opened new locations in Scarborough and Kennebunk. The Sebago Brewing Company has a casual atmosphere and a seemingly endless selection of beer. It crafts five different seasonal brews. However, it is favorites like Fry Leape’s IPA and Runabout Red that keep the diehard connoisseurs coming back.

Gritty’s brew pub and microbrewery is a long-standing tradition in Portland. Having opened its doors in 1988, Gritty’s is considered to be the oldest brew pub in Maine. From Black Fly Stout and Red Claws Ale to 21 IPA and Vacationland Ale, all the beer at Gritty’s is brewed on location.

The Atlantic Brewing Company, in Bar Harbor, is a backyard styled microbrewery. However, what it lacks in size it makes up for in quality, cutting-edge taste and entrepreneurial spirit. The tours have a Happy Hour vibe. Many loyal followers descend on this brewery in the summer for its signature Blueberry Ale. A small restaurant serves up barbecue classics as if you were in your own backyard, and the spirit of homespun hospitality, which led to the revolution of microbreweries, is alive and well in Maine.