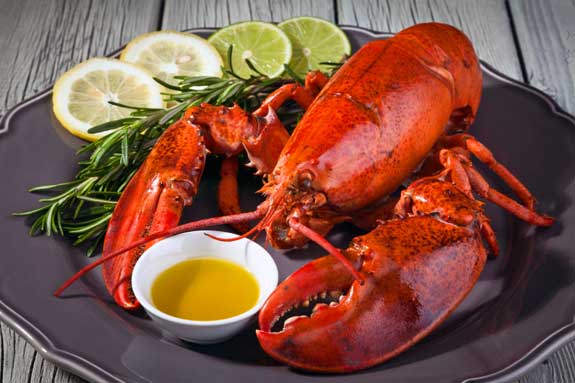 Winslow Homer, an American landscape painter, had a cottage studio overlooking the ocean in Prout’s Neck, Maine. Fond of dramatic maritime scenes, one of Homer’s most famous paintings, The Fog Warning, is hanging at the Museum of Fine Arts in Boston. In the painting, a grizzled Maine fisherman is navigating his dingy through rough seas. He has a Hemingway-sized fish in his small boat, and he is looking over his shoulder at the darkening storm gathering on the horizon, wondering if he will be able to get his prized catch ashore before nature’s wrath overtakes him. This painting is the perfect illustration of Maine’s complicated and turbulent relationship with the sea. Whether we sit down at an upscale restaurant, unfold our waterfall-pleated napkin and order Lobster Newburgh, or wipe the butter and brine from our hands with a paper-towel while we feast on a basket of steamed mussels at a local clam shack, it is easy to forget that the food on our plates is the result of someone else’s labor.

Maine is the largest lobster producing state in the nation, and it is not uncommon for the fishermen to haul in between 70 and 90 million pounds of lobster a year. It is curious to think that Native Americans once used lobsters to fertilizer their fields, or that in colonial times it was the food most commonly served to prisoners. Between the 1840s, when Maine established its first commercial lobster fishery, and today, the lobster industry has boomed. Maine is as synonymous with lobster as Vermont is to maple syrup. There was even a time not long ago when you could buy live lobsters at the welcome center on Interstate 95 near South Portland, along with lobster postcards, bottle openers and magnets. It seems the days of whipping up some grilled lobster tails as fertilizer have long passed.

Dine in or take out, but be sure you visit one of Maine’s lobster pounds. Here are three to get you started.

While lobster is Maine’s signature dish, its famous cold-water shrimp, known as Pandalus Borealis, make up nearly 80% of the market. The cold, clean, nutrient rich waters of the Gulf of Maine give the shrimp their pink color and sweet and tender taste. In Maine, shrimp season lasts only a couple of months and regulations are strict, so keep your eyes peeled for these locally sourced delicacies.

Maine produces some of the best shellfish on the east coast. Dungeness crabs, fat-bellied clams and mussels are ubiquitous at the lobster shacks around the state and fried up annually at Firehouse Clam Bakes. However, you would be surprised at the amount of high-quality oysters that are being produced in Maine. From Taunton Bay Oysters, which are farmed in the bays around Acadia National Park, to Winter Point, Gay Island and Pemaquid Oysters, which are seeded where the Damariscotta River intersects the Atlantic, Maine is harvesting some of the most distinct and flavorful oysters in New England.

Rounding out the state’s $20 Fisherman’s Platter, anglers are continually hauling in flounder, Atlantic halibut, bluefish, Atlantic salmon, shad, pollock, Atlantic cod and haddock. It was probably one of these northern New England species that Winslow Homer’s rugged, Maine fisherman was hauling ashore in his boat.

Maine might be the lobster capital of the U.S., but with 6,000 rivers, streams and lakes it boasts some excellent freshwater fishing. Maine is less than 10% developed and more forested now than it was in the 1880s. When you add these ingredients together, Maine becomes the ideal place to strap on your waders and take out your fly-fishing reel and homemade lures. With that many lakes and streams, an old fashion backyard fish fry cannot be far behind.

In Maine, catching landlocked salmon is like hooking the Holy Grail. This is not only the most prized fish amongst anglers, but it has been designated the official fish of Maine. A relative of the mighty Atlantic salmon, this cold-water fish is known for its gravity-defying aerial leaps and quick runs. Mainers are also fond of brown trout. This popular fish is plentiful in the central and southern part of the state, and it is a local favorite whether it is battered, fried or smoked on the grill. Depending on what you are trying to hook for dinner, Sebago, Moosehead, Rangeley and West Grand Lake are all excellent places to try your luck.